Don't miss anything. Get news about our walks, special offers, events and behind-the-scenes stories from Australian Walking Company.

Thank you! You have successfully subscribed to the Australian Walking Company newsletter.

A four day 'en plein air' retreat with Jock Young based at the stunning Kangaroo Island. Spend the days painting the incredible landscapes, light and colour and the evenings chatting about painting with a few glasses of wine, delicious food, and like-minded company.

Nine thousand years ago, Kangaroo Island separated from mainland Australia forming a unique landscape of wild and raw beauty.  Spend four days taking a range of short walks to diverse eco-systems where you can set up and paint. This wild outpost is located 20 kilometres off the South Australian coast.  Gondwandan megafauna, abundant wildlife, towering sea cliffs and broad sunsets with a glass of red in hand form part of your discovery of the Kangaroo Island's tracks.  Our intimate groups of no more than 14 walkers will stay in architect-designed private accommodation with sumptuous meals prepared by your guides.

Direct bookings only.  For all enquiries and bookings please contact the Australian Walking Company on +61 3 5237 4276 or email bookings@auswalkingco.com.au. 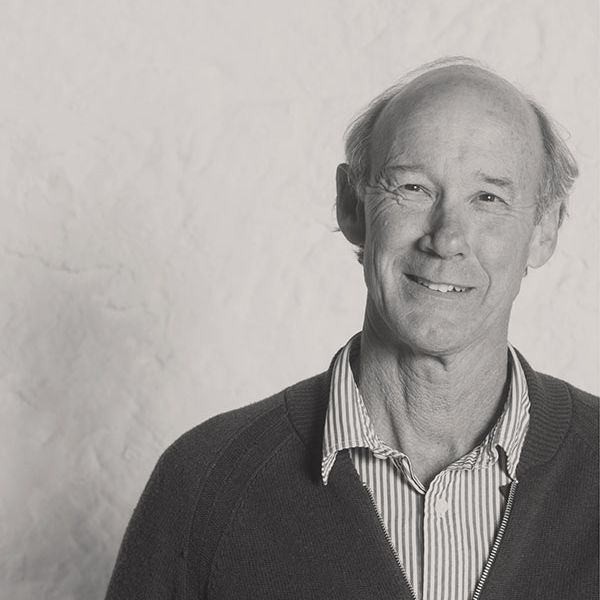 Jock Young grew up on the beaches of northern Sydney, studied marine biology and moved to Tasmania in 1984, to work for the CSIRO. He has always been drawn to the sea.

It’s the central theme in much of my work. I am particularly interested in the coast, which has a dynamic quality that is rare to find anywhere else. The interplay between the sea in all its different moods and the adjacent landforms has been a constant subject for me.

I started painting as a teenager growing up on Sydney’s Northern Beaches. We spent a lot of time in and around the water. At that time, the area was relatively undeveloped so there were plenty of places to go for a ride or a picnic - and there were lots of times that we would take our paints. We had many conversations about art in general, and painting in particular.

Apart from its natural beauty, Tasmania has a distinct light, which has been the element that’s interested me since my arrival.

A video with Jock's latest work can be discovered here and on Instagram.

Our lodges, huts and offices feature the work of Handmark's artists. Allanah Dopson and her team are found in Salamanca, Hobart.

Allanah was quick to recommend Jock to lead a coastal art retreat. "The outdoors is his canvas. He is humble and draws us beautifully into his habitat to share his love of the island coast. His background as a marine biologist and en plein air painter make him the perfect leader. To have a group painting and celebrating together at Kangaroo Island, a place of vibrant colour, will be wonderful.'

Our intimate groups of no more than 14 walkers will stay in architect-designed Cape du Couedic Cottages, explore the numerous short walks of Flinders-Chase National Park and enjoy sumptuous meals prepared by our naturalist guides. 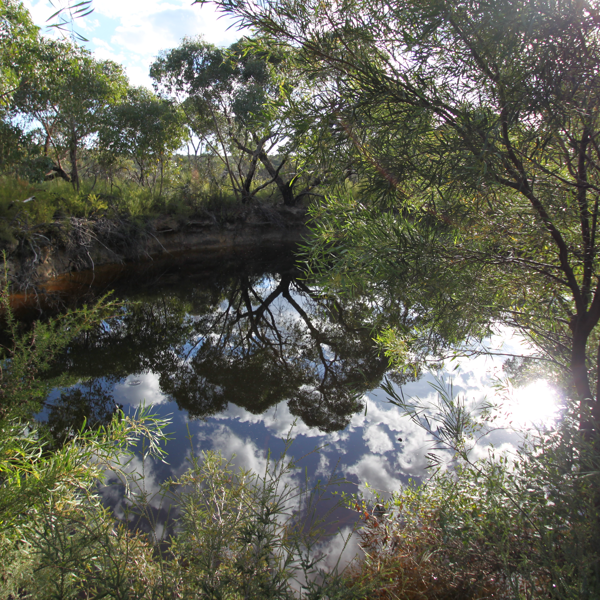 Following your early morning short flight from Adelaide, we'll collect you from Kingscote Airport and transfer to our departure base in Cygnet River.  At the base, you'll be introduced to your fellow walkers and your host and two guides will run through a gear check and trip briefing before we set off to Flinders Chase National Park.

We depart from the Flinders Chase National Park Visitor Centre and right from your very first trail steps, we dive deep into the Gondwanan landscape.  It is here that the discovery of ancient megafauna and extinct wildlife was made - the likes of the Tasmanian tiger and the short-faced kangaroos.

We'll walk and find places to stop and paint along the Snake Lagoon hike where a mix of scrubland and low lying country follows the bed of Rocky River.  This area is known for its prolific birdlife and diverse flowering native plant species.  This popular trail winds through Sugar Gums and mallee before descending into the Rocky River valley. The trail crosses Rocky River and meanders along its bank to the mouth, providing spectacular views through the valley and across the Southern Ocean.

Then, it's a short drive back to our base for the next four days, the Cape du Couedic Cottages. We'll settle into three heritage-listed Light Keeper residences, built from hand-carved limestone back in 1907.  Thoughtfully restored, these historic quarters feature twin-share rooms and sensitively designed new bathrooms.  Our communal pavilion - The Commons - is where we'll share good wine and a barbeque bounty featuring local Kangaroo Island sourced lamb. 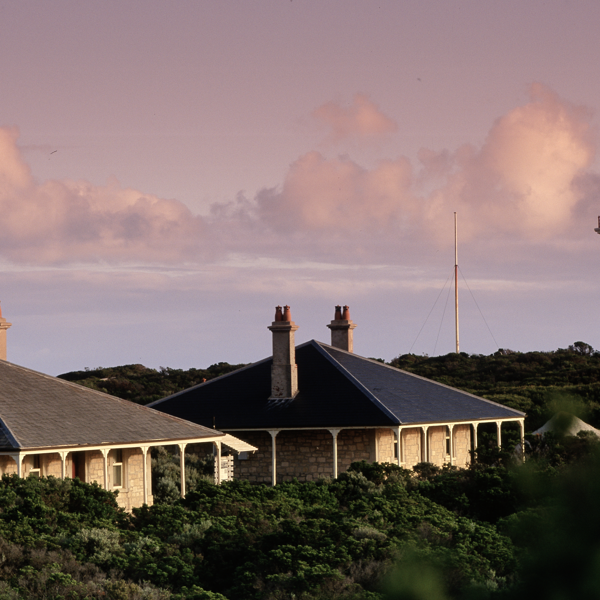 Approximately 8 hours walking and painting | Distance: up to 5km

Cape du Couedic is a historic Light Station, Lighthouse and Light Keeper residence. They provide a fascinating historical narrative and as such feature as one of Kangaroo Island's iconic locations.

After doing the Admirals Arch Walk explore the area around the lighthouse further on this Cape du Couedic Hike loop trail. The trail meanders along away from the crowds, with viewing lookouts over the ocean and on the hilltop. Interpretive signs along the way describe plants and the way of life for lighthouse keepers and their families that tended this remote outpost.

Tonight, watch the sun sink over the sea as guides prepare a three-course meal. Enjoy a glass of wine as you chat about painting. The daytime en plein air studies are supported by three nights of drawing the same still life in three different ways- line, tone and contrast - to help in identifying different ways of approaching the landscape. These sessions are informal and enable lots of discussion about the day’s painting and wherever such conversations lead. The open fire and a glass of wine make it a nice way to end the day. 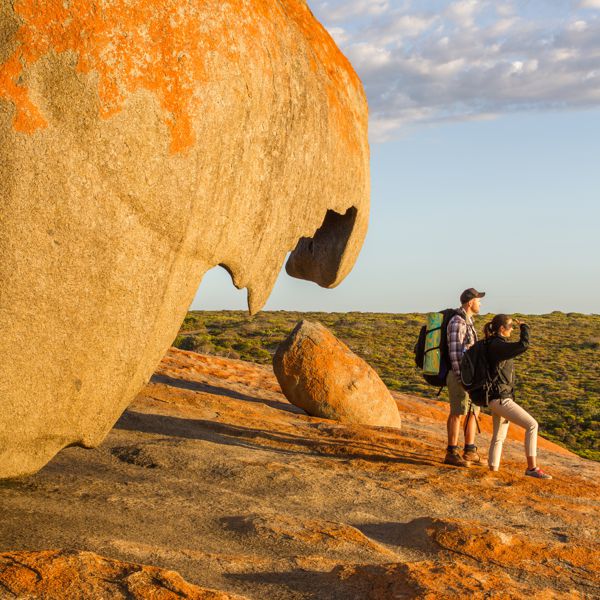 Approximately 8 hours walking and painting | Distance: up to 5km

If you didn’t pay a visit to the fur seals yesterday, early risers can wander down to Admirals Arch before a hearty breakfast. Today, we indulge in a day spent painting one of Australia's iconic rock formations.

A short wheelchair accessible walk along a boardwalk to the stunning geological feature of Remarkable Rocks. The granite boulders appear as seemingly artistic sculptures scattered across a larger granite dome. Interpretive signs explain the formation of the granite boulders.

After a day of epic coastline vistas, we’ll retire to the cottages for another evening shared with like-minded artists, local wine, beer, cheese and seafood. 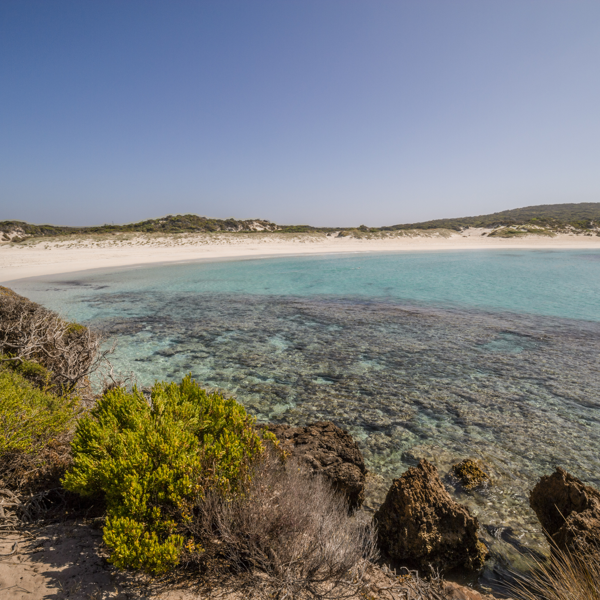 Approximately 3 hours walking and painting | Distance: up to 2km

This small, secluded bay sits along the south coast of Kangaroo Island just west of the famous Kelly Hill Conservation Park. It is accessible via West River Road, which runs south off of South Coast Road. West River Road is an unsealed road, but like many places the harder it is to get to the more beautiful it is. The views east are expansive and stunning. This last morning is a final chance to witness the incredible combination of landscape, colour and light that is Kangaroo Island.

Our bus collects us for transfer back to Cygnet River Base where we celebrate with canapes and a glass of local wine among new friends. We’ll then deliver you to the airport for your return flight, or for those wishing to stay on, we will transfer you to your Kingscote accommodation.

Three heritage listed cottages have been sensitively restored, featuring new bathrooms and furnishings.  Dating back to 1907, each cottage is made from locally sourced hand-carved limestone.  The twin-share rooms are a welcome retreat, atop the headland, and appointed with the work of Kangaroo Island artisans.
At this location, we have The Commons - a communal space for unwinding and dining around the shared table.  This open pavilion is the heart of tonight's Village Square locale, where your guides and host busy themselves preparing a barbeque banquet.  Later, retire to your cosy Cape du Couedic lighthouse keeper's cottage.

These are in addition to our standard booking terms and conditions. 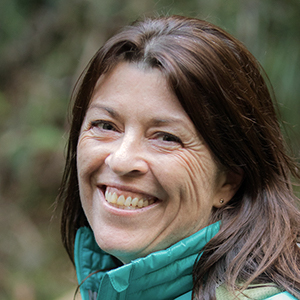 We're here to help 9am – 5pm Monday to Friday, otherwise, email us anytime and we'll be in touch.